From Wikipedia, the free encyclopedia
InnoGames GmbH is a developer and publisher of browser-based and mobileonline games. By the end of 2012, InnoGames reached 100 million registered players and generated about 50 million Euro in revenue.[1]

In 2003, founders Eike and Hendrik Klindworth and Michael Zillmer created and released the browser-based online gameDie Stämme as a hobby project. At the end of 2005, this game reached more than 50,000 active players. Due to this huge success, they decided to work full-time on the development and publishing of browser games. InnoGames was founded in early 2007 to handle the operation and continued development of the game. Since then, the company has developed new games and publish their games worldwide.[2]
In May 2010, the investor Fidelity Growth Partners Europe (FGPE) joined InnoGames with a minority share. Also in 2010, former Electronic Arts executive Gerhard Florin joined InnoGames as Chairman [3]

While InnoGames still puts focus on browser development, a shift toward mobile and cross-platform play is on-going. The first title that the company launched on mobile platforms was Tribal Wars, its founding game. Grepolis, another of its strategy browser titles, was also launched onto mobile platforms in 2013.[4]

What is Farming?
Farming is the general term given to the taking of resources from either another player or from a farming village. However, for the sake of clarity and a lack of confusion, it will be given the meaning of taking resources from farming villages. Prior to 2.0, farming was done through the use of troops. This was a rather tedious task as you would have to send farm trains to the villages to strengthen the village to 100% and follow that up with an attack in order to obtain the maximum amount of resources. However, in 2.0, farming can be done with a click of a button, and without the hassle of using valuable troops to farm. In order to ensure that you receive the most amount of resources with the least amount of effort, this page will help to answer all the mysteries of farming in Grepolis 2.0.

Conquering Farming Villages
In Grepolis 2.0 every player begins the game with 1 farming village under their control. Because troops are no longer needed to farm, the location of this village may be some distance from your city. In order to gather resources or troops from the other farming villages, you must conquer them by defeating their resistance to your conquest. The amount of resistance in each village increases as you gain more farming villages, and you are not able to conquer more than one village at a time. You must also meet the minimum farm space requirements, as indicated by the blue bar in order to take over another farm.

Farming in 2.0
As each player begins a world with 1 farming village under their control, they have a few options open to them as to how they begin to gather resources from that farm. The initial choices available to a player are: Demand Resources, Loot Resources, and Expand the Village. Later, as the player progesses they are able to Demand Troops (Level 3+ farming villages only) and Trade Resources (with a Level 5 Marketplace).


Whichever option a player chooses, the farming village will have a cool down period in which it will not be possible to gather more resources until this period has finished. You can think of this wait time as a resupply of the village's resources and troops since your last visit. Unlike other aspects of the game, this cool down period is not affected by the world speed settings. The amounts that are stated on the screen are for each resource and are not a total amount.

In 2.0, because troops are no longer needed for farming, the research Booty instead provides a player with an additional 4 options for obtaining resources through demanding and looting. The new options will give you 66% more resources than the original options, but the time it takes to regenerate those resources is also doubled.

Revolting Farms
Through the use of the Looting and Demanding Troops options, you can lower the moods of your farming villages low enough that they revolt against your occupation of them. If this happens, you will no longer be able to gather resources or troops from that village until you have reconquered that village. It can be a fatal mistake to have this happen in the early stages of a world as you will need to meet the farm space requirements to retake a revolting village.

Mood increases by 1% per hour depending on the World Speed. Because control of the farms is dependent on the mood of the village, you should take care to not farm when the mood is below a certain threshold which is below 80% (or 64% with Diplomacy). The mood of the village can drop to below these percentages, and even below zero. 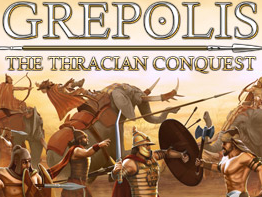 The event "The Thracian Conquest" is a whole new type of event in Grepolis. Some insurgents started to cause chaos in the Thracian realm. This is a good opportunity for you to bring peace to the lands by leading an army of mercenaries against the rebels and to come by some good loot on top of that.

Battle against the rebels
If you select a battleground that can be attacked, the attack window will open up. The rebels that are present there and their strength will be displayed at the bottom, and you can select your own Thracian mercenaries in the upper part of the window.

Please keep in mind that each battleground has its own limit on how many units you can use. If you have more mercenaries under your command than the battleground allows, you have to make a tactical decision which type of unit and how many you want to send into battle. Each Thracian unit has its own strengths and weaknesses against specific units. An example:

Tribal Axmen deal 50% additional damage against Peltasts. If there are 50 enemy Peltasts at the battleground and you have 70 Tribal Axmen at your disposal, it is a good idea to select 50 Tribal Axmen. The damage bonus does not count for surplus Tribal Axmen. Let's assume the battleground limits you to use 80 mercenaries, you can then use the remaining 30 slots (50 are already occupied by the 50 Tribal Axmen you selected) according to your personal taste. However, it wouldn't be wise to send Spear Throwers as the enemy Peltasts would deal extra damage against the Spear Throwers!

As you can see, quite a bit of strategic thinking is asked for.

Should you be victorious, you will receive the respective reward of that battleground. Alternatively you can leave the reward at the battleground until the end of the event to claim it at any later point in time. If you collect your reward, rebels will repopulate the battleground again after 4 hours, but every time their forces will be even stronger than before. This way you can repeatedly get the same reward whereas the challenge continues to rise.

Another noteworthy feature is that, even if you are defeated when attacking the rebels, the casualties on the enemy side are permanent. This means that you can wear down the enemy with many smaller attacks until you are finally victorious.

Hercules
Hercules himself, the famous and imposing hero, joins your forces to restore order in the Thracian realms. When you attack a rebel battleground, Hercules can help you in that attack, which in turn will lift the morale of your mercenaries and raise their combat power by 20%. After his heroic act he needs to rest for 12 hours to recover. But you can also motivate him to go right into battle again with some Gold.

The Thracian mercenaries
Although you start your path of conquest with a few mercenaries (which were given to you by their leader Tenia), you shouldn't stick to such a small force. The following activities in the game will help you to find new groups of mercenaries at random and therefore to build a stronger army:

If you find a group of mercenaries, 8-12 random fighters will join your forces (Peltasts, Tribal Axmen, Spear Throwers, Elephant Riders, Veteran Warriors). Keep in mind that you can find a maximum of 10 groups of mercenaries per day. Of course you can also buy 10 mercenaries for Gold which will remain with you until the end of the event.

If your mercenaries get severely wounded, this is no reason to discard these tough, able fighters. Why? Because every 7 hours a healer will arrive at the camp of your mercenaries to tend to every injured mercenary. If you want to have your army ready for action again as fast as possible, you can pay the healer some Gold and he will arrive at once.

Happy Game to All.